Written by Crofton77 on November 5, 2017. Posted in eatsaroundaustralia.

Ok I admit it, the Brisbane Lions had another bad season. Yes we won more games than last year BUT we won the wooden spoon!! 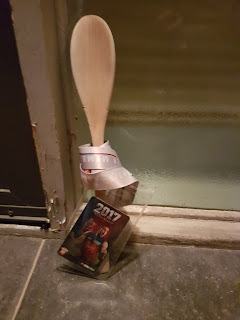 Off season is like walking aimlessly through the wilderness until Cricket season starts.
Off season has such delights as the trade period, the Draft,  International Rules , Women's Competition and the pre season schemozzle. The media, bless their collective cotton socks, have a absolute field day trying desperately to turn dross into gold with their stupid left field predictions about what will happen with whom and where. The long suffering faithful fans angst accordingly and take to social media to vent their spleens.
The Lions:
Delisted my sponsored player, Josh Clayton – that's two I've sponsored in the number 19 jumper by the way, maybe I am the kiss of death???
We also delisted a few other good quality young men but we have picked up Luke Hodge and…..Charlie Cameron.
Both of these pickups are controversial; Hodge because he had ostensibly retired for Hawthorn and Cameron because the Crows are a bunch of Chardonnay swilling, Apricot slice consuming, Texas John knitted doll making, Webber Q toting, the opposition supporters are too loud whingeing bunch of misbegotten whelps!!!!
So when the opportunity arises to get up the noses of a Crow supporter or two one seizes it with alacrity!
I had an apricot slice delivered to a rampant Crows supporter to say thank you for Charlie Cameron…..apparently it ended up in the bin, but the point had been made. Of course if I am successful in my attempts to sponsor Charlie there will be many more opportunities to get up the collective noses of Crows supporters everywhere…
Currently the faithful are sat in the corner of the couch, holding their preferred libation, rocking gently whilst watching the calendar.
2018 looks to be a better year (hope springs eternal annually) Hodge will help young Harris Andrews down back and Cameron will add speed and depth to the midfield. I have decided a three game membership is the go as I still live interstate and I have put down Charlie Cameron as the player I want to sponsor!! Of course my second preference was whoever wears the number 19 next year……..