Written by Crofton77 on July 16, 2017. Posted in eatsaroundaustralia.

Even though I now live and work in Canberra, I am still a loyal Brisbane Lions Fan, Member, Member of the Women of the Pride and Player Sponsor of Josh Clayton (19).

My Lions Membership is of the Supporter Member variety, I don't attend games being that I live 1200 km away from The Gabba.

Anyhow…one of the benefits of being a player sponsor is the Player Sponsor Function each year. Two are held; one for Victorian members and one for the Queensland members.

This year I few into Brisbane the day of the function and after an interesting cab ride – Greek chatty cabbie who had some very interesting ideas re the governing of Australia and its States – I checked into the Wellington Apartment Hotel.
I love staying here. It's clean. comfortable and the restaurant is not too shabby at all. It is also a brisk 10 minute walk to The Gabba, so ideally placed for footy and cricket!!

The Normal Autistic Chickie was stuck in traffic and she still needed to get changed – we were going to be fashionably late.
Being the sensible middle aged type I am I had brought some flat shoes for the walk to The Gabba , the footpath is crap and were were running late. Guess who tripped three times on the way? Guess who has some really pretty bruises on her legs, feet and hands?

I changed into heels at the venue before meeting with the players, I walked home in those heels incident free……..

The function is held in one of The Gabba function rooms and canapes and drinks are served. It's always a convivial atmosphere. Catching up with players and friends and the champagne is nice too!

The vibe among the players is very positive – we're not winning games but the club culture has improved and our youngsters are signing on in droves. I believe the Lions can win on any given day – instead of lying down and getting smashed in games they are now fighting out 4 quarters.Each player I spoke with said that Fages ( Chris Fagan-coach) was not as dictatorial as some previous coaches – he has a more nurturing manner. Often it is more about what isn't said by the players but this time it seems there are no undertones to report.
Apparently my boy Josh was a bout ready to be called into the senior team when he did his ankle in the NEAFL. His recovery has coincided with a couple of wins and Fages wanted to keep the team together. We've had some big losses the last two games so maybe young Josh might get a shot at the big dance as Fages tests out the youngsters.
Obligatory picture: 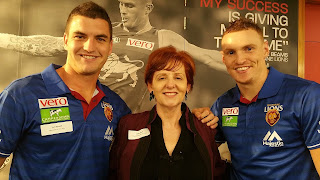 After the function the Normal Autistic Chickie and I wandered back  to the hotel and had delicious Lamb Shanks from room service. Delicious!!! Time spent with the Normal Autistic Girl is always well spent.
Champagne, Footballers and time with the daughter – all around a lovely evening.