Written by Crofton77 on April 15, 2017. Posted in eatsaroundaustralia.

There's so much to see and do on the way to Queenstown.
There are boutique wineries and cheese places, towns and hamlets to visit and even a museum!
The Wanaka Transport and Toy Museum to be precise. This place is amazing!!!
There are so many different things to see like three humongous great hangars of 'stuff' and then all the toys are in the main building. Have to say I was not impressed with the small Star Trek exhibit but then you can't have everything. The cars were amazing, they even had an Austin A40 Countryman – the first car we owned in Australia!!! 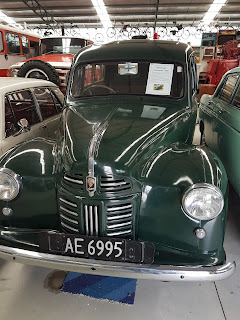 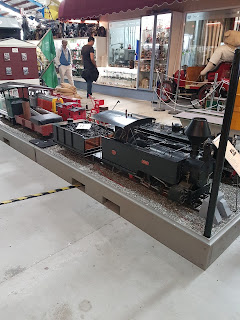 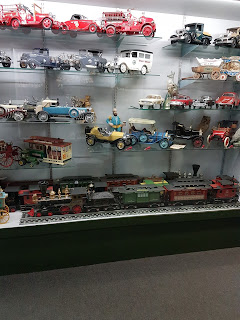 We spent quite a while here enjoying the trip down memory lane!

Queenstown is beautiful. It has everything for everyone. Breath taking scenery, shopping, quiet retreats and adrenaline junkie fixes. HR and I could retire here, when we win the lotto that is.

Queenstown sits on the shores of Lake Wakatipu set against the Southern Alps. Picturesque is trite when considering such a beautiful scene.

We stayed at the Heartland Hotel Queenstown and I wasn't impressed at all. The girl at reception was just short of rude and not very welcoming at all. I always feel that first impressions are important and have a huge impact on how your stay will go. The room was serviceable but directly opposite the kitchen of the restaurant so we were serenaded by the crash of crockery and cutlery as well as the chefs/staff yelling at each other over the cacophony. We were booked in for two nights and this noise was constant.

After checking in we went down the hill to check out the shopping. Walking back up the hill was almost as much fun as the Fox Glacier Terminal walk!!! Talk about steep!
We found a delightful ice cream shop on the corner near the water and walked around the beautiful gardens.
Back at the hotel we did some laundry and ordered room service for dinner. We shared some Buffalo wings, wedges and prawn twisters.
We also decided that what we had planned for our stay, an hour at the Onsen Hot Pools, was not enough so we looked at what else was available. We weren't interested in the speed boats and bunjee jumping. After a little effort on the google-ator we found a trip on the TSS Earnslaw across the lake to Walter Peak for lunch.
After a troubled night's sleep, the noise remember, we set off down the hill looking for breakfast before our cruise.
On the way down town we stopped at the Queenstown Information Centre and booked a gondola rid to the top of the mountain and decided dinner would be nice too!!

We booked into the cruise at the terminal and settled for the cafe around the corner from the boarding area for a spot of tea and toast. The Public Kitchen and Bar served a lovely cup of tea and  really special cheese rolls. The views were gorgeous. 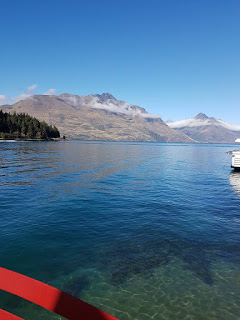 Boarding the TSS Earnslaw was efficiently completed and our journey began.
The TSS Earnslaw is the only coal powered steam ship in the Southern Hemisphere and she is in beautiful condition – all original. There's even an actual stoker shovelling coal!! The sound and feel of the engines was almost comforting, even with the noise of the other passengers ( a full load I believe). The Captain gave commentary on the rise across. the scenery was such that there are no superlatives that would even come close to being adequate to describe it.

At Walter Peak we disembarked and wandered over to the restaurant. Now we had booked for the BBQ lunch and really had no idea what to expect….a veritable FEAST is what we got.

A splendid room set with so many choices for entree, cheeses, salads, vegetables, breads and over to the left a dessert bar to tempt the most jaded taste! But we had come for BBQ and BBQ we got! Chicken, pork, beef and lamb all beautifully prepared and succulent to the taste. New Zealand meat has a sweeter taste than Australian.
HR had a beer and I had a glass of bubbles and we literally tried everything. We were stuffed. Then we went back for seconds……..
After lunch we waddled around the gardens and then watched a sheep dog exhibition followed by a shearing display.
The trip back on the TSS Earnslaw was not as noisy as the trip out.

We lumbered back up hell hill to the hotel and rested for a little before toddling off again for the gondola ride and dinner.

I love this gondola it scared the crap out of me as it took off I swear we were going to  hit the mountain!! On reflection we should have done the luge rides as well…next time. 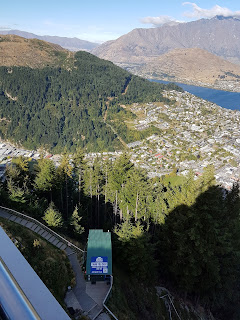 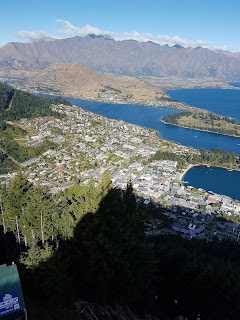 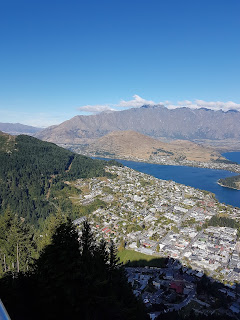 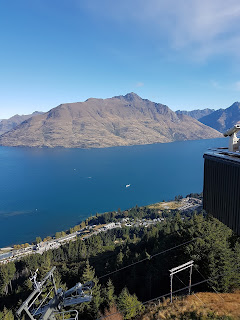 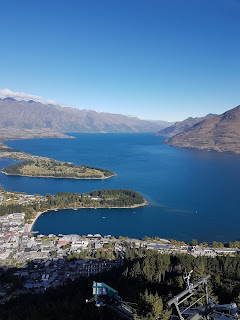 At the top of the mountain we had a drink and waited for our reservation at the restaurant. We paid a little extra for a guaranteed window seat and a drink.
If we thought Walter Peak was an extravaganza of food it paled in to insignificance compared to the spread at Stratosfare Queenstown Restaurant. So many different options, so many choices,  HR found the 'do it yourself' Laksa and after two bowls, two prawn cocktails and assortment of desserts – creme brulee, creme caramel and some pavlova he was done!!! I had salmon, sushi, shared some of HR's prawn cocktail and availed myself of almost one of everything on the huge dessert bar. We left the meats alone as we had had a sufficiency at lunch. Tip: don't do both TSS Earnslaw/Walter Peak lunch and the Gondola Dinner package in the same day!!!!
The food quality did not suffer for being produced in such large quantities. HR and I will return!!.
I am sure they had to reinforce the cable on the gondola to take the extra weight on the way back down.
The walk back up hell hill to the hotel almost killed me….lol.
Next day we were Dunedin bound…..