Written by Crofton77 on May 22, 2017. Posted in eatsaroundaustralia.

I may or may not have mentioned that HR only gets one weekend off per month, the rest of his 'weekends' occur during the week while I am working.

I may or may not have mentioned we like to do something with the weekends we have together, you know, go away, have an adventure.

HR and I subscribe to various travel deal emails. Some of the deals look quite good and a month or so ago we decided to take the plunge and buy one of the deals.

Luxury Escapes was the company we chose and the deal was a two night stay in Sydney at the Ovolo Hotel Woolloomooloo. The deal was $599.00 for two nights, buffet continental breakfast daily, happy hour daily, free mini bar daily and use of the hotel amenities. We figured why not? We bought the deal and then booked the dates we wanted no problems.

HR decided we would take the train to Sydney so he didn't have to mess with the traffic which is dead set nuts!!!

I took a Friday off and we caught the early train to Sydney!!! The trip took as long as it would driving but was so relaxing and no pesky traffic or getting lost (that came later). The Buffet car on the train was reasonably well stocked and very well priced. As we'd left home so early, taxi to the station for 0645, we decided to have breakfast on the train – not the worst move!!

After breakfast we settled back and enjoyed the ride. I was reading Sharon Kay Penman's “The Reckoning”  on my Kindle and HR fell asleep.

We arrived at Central Station Sydney around 1130, disembarked and wandered onto the Grand Concourse in search of an OPAL card and what train we needed to catch to get to the hotel.

The lovely young lady at the help desk sorted out the OPAL card and advised us that after we spent $15.00 per day on travel any further travel that day would be free!!! We perused the boards above the hep desk and then had to figure out how to get to the Terminal and Platform we needed for Martin Place.

If you've ever read Stephen King's Dark Tower series you'll understand how I felt when I went into the underground parts to get to the train….it was like being below Lud with Jake as he out ran the bad guys…I kept expecting to see creatures coming out of the tiled walls and it didn't get any better the more we went into these areas…it was kind of surreal.

Anyway, we boarded the train and off we went. Arriving at Martin Place we needed a little direction on which way to go and there was a really nice bloke, train station staff, was very helpful. As we emerged from under the ground we were hit with the arcade of the homeless. It was confronting to be faced with these people whose only shelter was under the arches of the arcade that ran the length of the station.

Out of the station and into the gardens and getting lost!! We almost didn't get lost but there you go -we had no clue and the cabby made a quick tenner getting us unlost.

Arriving at the Ovolo and dropped our bags- room wasn't quite ready so we went in search of lunch.

Manta was where we chose to dine. It's only now looking for the link that I see it has quite the reputation and that HR and I have excellent taste.
Sitting near the water's edge we decided a light lunch was in order and chose some 'hand cut Angel chips' and a cheese tasting plate from a menu heavily seafood oriented. From the wine list I chose a Cloud Bay Sauvingon Blanc (New Zealand) and of course HR drank beer – Murray's Rude Boy Pilsner.
The cheese platter was bloody awesome; particularly the Cashel Blue cheese. Smooth rich creamy and not salty like some Blue Cheeses are. The angel chips were very tasty. The  scenery was so engrossing; trying to chose which of the many boats we should buy, that we ended up having a few more drinks and staying there quite awhile. The service was excellent as well. 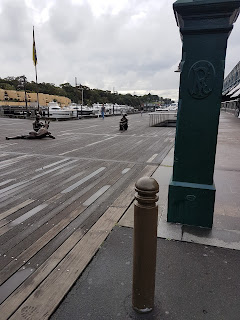 Eventually we returned to the hotel and completed check in. Up to our room and it was quite a surprise. Very quirky and well set up, great views and usb ports everywhere!!! I did find the toilet with no lid a tad disconcerting. Robes to be used, slippers to take home, a bathroom filled with toiletries and a set of scales! The mini bar was a tad disappointing with one beer, one cider, half bottle  each of white and red, water and coke. There was only one snack bag for the two days.
We didn't take advantage of the Happy Hour but we did do breakfast and let me tell you that was a nice selection to chose from each day – very tasty, a good start to the day.

Saturday, after breakfast, HR and I set out for Martin  Place station (not getting lost this time) only to find out the trains on the Illawara line between somewhere and Bondi were replaced by busses because of track work. Well gee, new in town where do we catch a bus and what way should it go??? We fluked it and got to Central Station and wandered in the general direction of China Town getting distracted by Paddy's Markets where I picked up an amazing outfit at KIMDO clothes.

From the markets we wandered through to the Chinese Garden of Friendship. Stunningly beautiful and well wort the time, it was sad that such a haven of peace was spoilt by the constant traffic hum in the background. 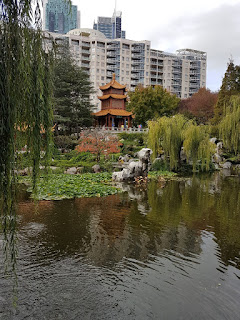 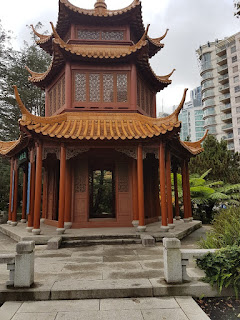 After the gardens we pondered our next move- go to Spotless stadium and watch the NEAFL match between the Brisbane Lions and the Giants, have lunch in China Town or got to the Cinema and watch Arthur – we figured a train ride to the stadium where we could get junk food for lunch and then return to go to the cinema.

Guess who got on the wrong train? By the time we got back to Central it was too late to try again so we figured we'd go to Darling Harbour and catch a Ferry to somewhere. We caught a Ferry, bought some Sushi and Dim Sum, and did Darling Harbour…. 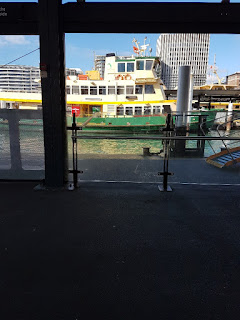 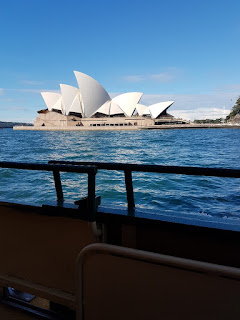 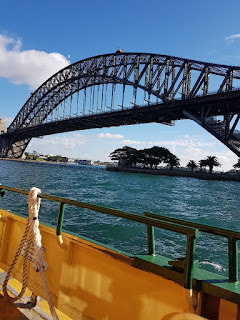 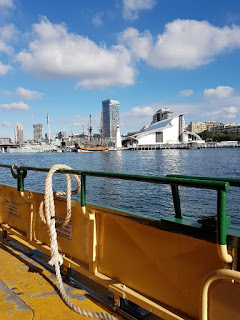 What great way to spend an hour!!!

Right we're going to the Cinema!  Or are we? Would have been good if we could have found one easily. We gave it up as a bad joke and strolled back to the Hotel, ordered room service and settled in for the evening. HR and I are not night people.

The following day after breakfast we caught a cab to Central with the luggage and caught the train home.

I think the deal was a good one and worth the money. I still am not a fan of Sydney.